Premise: A debt-saddled genius surgeon finds himself entrenched in the dirty dealings of his hospital and a plot to unseat and murder the beautiful heiress who lies prone in a coma.

Yong Pal should have emerged as the year’s most exciting, rip-roaring ride and unabashedly entertaining show. Instead, clumsy plot manoeuvrings  at the show’s final hours put a considerable damper at a crucial juncture and tanked it in a way that poor endings often do with dramas. Sad really, because it was a fatal blow to a show that had all the right ingredients but somehow added up to less than the sum of its parts.

It all started so well, too. Yong Pal burst out of the starting gate revving on all four cylinders with energy and style and a story that foregrounded intrigue and excitement.  It felt like a go-big-or-go-home kind of show, its action and thrills and a flair for spectacle putting a fresh spin on the medical drama. It felt like a little bit of Healer  spunk and a touch of God’s Gift  unpredictability had infected the usually sedate hospital corridors of dramaland.  END_OF_DOCUMENT_TOKEN_TO_BE_REPLACED

Premise: Cha Hong Do suffers from a crippling form of social phobia which causes her to blush uncontrollably. When her grandmother passes away, she is forced to venture out into the world to fend for herself, and meets and falls for a psychiatrist with issues of his own.

Only in a K-drama can a story about a woman suffering from social anxiety who ends up falling for her suicidal psychiatrist be affecting, engaging, and if you can believe, relateable. While Heart to Heart requires a hefty suspension of disbelief and frequently takes whimsical flight, it’s emotional core remains grounded, and anyone drawn to romances between unlikely oddballs and dysfunctionals will find this a warm delight.

Furthermore, while this isn’t the first rom-com to feature protagonists with mental conditions, it feels fresh in a way that makes it stand out among the crowd. A lot of the credit for this goes to PD Lee Yoon Jeong. If you’ve seen her work in Coffee Prince, you’ll recognise her gift for bringing a script to living, breathing life instantly, with sets that feel warm and lived-in and music that gives the show a bona fide sonic personality.

If you can’t tell yet, I’m a fan of her work, and after an absence from dramaland, I think her return with this drama is a triumph of sorts. Not many can pull off whimsical and playful effortlessly. Just about every trendy rom-com released over the past couple of years are examples of feigned, try-hard quirk of varying degrees of success. END_OF_DOCUMENT_TOKEN_TO_BE_REPLACED

Premise: A lusty ghost possesses the body of a meek mouse in order to get closer to a celebrity chef, and gets more than she she bargained for.

A romantic-comedy that’s a bit of an odd duck, Oh My Ghost has many strengths that far outweigh its considerable weaknesses. With a tinge of a macabre and melancholy, this is a show that ultimately satisfies despite a few missteps, thanks in no small part to some very strong lead performances.

With a premise straight out of The Master’s Sun and spliced with a dose of Coffee Prince, you won’t be in unfamiliar territory. Also coming hot on heels of the recent crop of split-personality dramas, OMG puts a different spin on that trend, and with a murder-mystery thrown in the mix, it’s a minor miracle the show is a lot less scattered than it sounds on paper.

The plot revolves around a trio of characters: heroine Bong Sun (Park Bo Young) is a mousey, meek ghost-seeing kitchen helper with a big crush on her boss, cocky Chef-on-the-rise Kang Sun Woo (Jo Jung Seok); the titular ghost is Shin Soon Ae (Kim Seul Gi), who spends her days possessing women in order to lose her virginity in a desperate bid to resolve her ‘grudge’ and transition onto the next life. The plot kicks into gear when Soon Ae takes over Bong Sun’s body when she thinks she’s found the right man to sleep with—Chef Sun Woo. END_OF_DOCUMENT_TOKEN_TO_BE_REPLACED

There comes a time in every live-watch experience when you’ve decided you like a show enough to commit to watching it all the way through, a time when your heart wants to leap headlong into full-on crush mode, but your head tells you to stay cautiously optimistic because you don’t want to set yourself up for disappointment.

This is the state I’m in with this show now, my friends. I want to crush so badly on Yong Pal. SO BADLY. Because there are a heck of a lot of reasons to.

Kim Mi Kyung! Nobody told me she was in this drama! I still have so much residual affection for her Ahjumma in Healer that I literally squealed when she appeared on screen as the head nurse in Yong Pal’s hospital, and being all very Ahjumma-like towards him to boot. And I was like, thank you so much show for not just giving me Kim Mi Kyung but for giving her what looks like a pretty great character as well. She’s going to be his moral compass, possibly his surrogate mother figure. I AM EXCITE.

And then there’s this magnificent creature:

END_OF_DOCUMENT_TOKEN_TO_BE_REPLACED 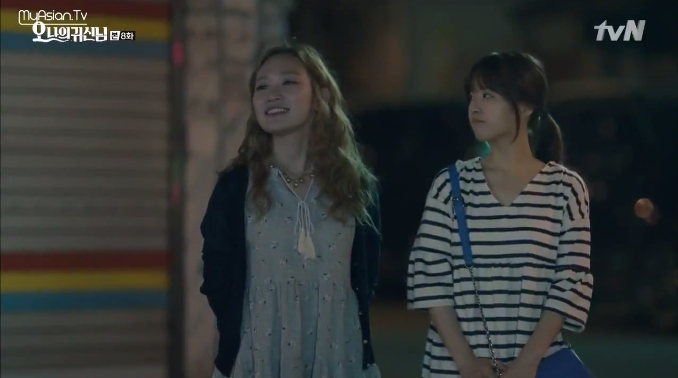 Isn’t this a curious thing? If I hadn’t let procrastination get the better of me, this post would’ve turned out quite different. First, it would’ve been much shorter because I haven’t really had all that much to say about the show as I’d been watching casually. Until last week that is, when Oh My Ghost became a whole lot more interesting. Like, A LOT more interesting and now I’m eager see how everything going to play out.

This isn’t to say I haven’t enjoyed the show thus far, quite the opposite. It’s just that what I’ve enjoyed most about show seemed to only emerge occasionally. Because oddly for a rom-com, I’m not particularly invested in the “rom” part of the equation (I know! I must be crazy!) though I do enjoy it, and I don’t find the “com” all that funny. I’ll get to the romance in a bit, but the comedy, since we’re on the subject, just isn’t what the show does best. It puts the heavy-lifting squarely on the shoulders of its actors, in which case an actor like Park Bo Young can pull off because she can effortlessly make whiny aegyo seem charming, while an actor like the guy who plays sous chef comes off as grating, like a flapping, squawking duck.  END_OF_DOCUMENT_TOKEN_TO_BE_REPLACED