I’m late yet again!  Sorry but the weekend caught the better of me.

It’s certainly been an embarrassment of riches with drama debuts coming in thick and fast over the last couple of weeks. So many tempting prospects with strong, likeable casts this cycle, a vast improvement from the last. Offerings may be heavy on the medico-legal-cop-grangster variety leaving rom-com enthusiasts out in the cold, but I’m not complaining. I’ve got Witch’s Romance which is making me giddy with feels, and should help ease the pain of  two of my most beloved live-watches (Secret Love Affair, In A Good Way) ending this week. SOB.

1. No wonder with all the macho angst in dramaland at the moment there’s hardly been a peep about Flower Grandpa Investigation Unit which premiered last Friday on tvN. The comedy stars Lee Soon Jae, Byun Hee Bong and Jang Kwang as three hotshot cops who mysteriously age overnight into grandpas, and have to fight crime in their new bodies alongside Hee Chul. Choi Jin Hyuk cameoed in ep 1 as Lee Soon Jae’s younger counterpart. Here’s a taste of screencaps from ep 1:

END_OF_DOCUMENT_TOKEN_TO_BE_REPLACED

Well, I’m back with another round of questions to answer for the Liebster Award. Shucks, I’m really chuffed yet again by the shout-outs, especially since these are from blogs I love and read all the time. So let’s do this!

1. If you could write the script for a drama, what would it be about?

I recently heard a story about a fortune teller who tells fortunes using a deck of cards. The cards need to be buried with the fortune teller and then dug up after a few days by someone she’d chosen to pass them on to. And I thought, now that would make a great character!

So, my drama would be something along the lines of a fortune teller who goes in search for someone to pass on her powers to when she finds out that she’s dying. After a string of rejects she stumbles on a young woman who is a con artist with whom she inexplicably has a connection. Throw in a hot client-turned-love interest and another sidekick they pick up along the way, as this rag tag bunch go on their merry way trying to prevent a murder that the fortune teller has foretold. It’ll have lots of womance–our leads learn from and heal each other–lots of comedy, thrills and spills, heart, and some sexy kisses. But it ends with the fortune teller’s death. I haven’t filled in all the details yet and I doubt I can since I’ve never been one to write fiction, so if anyone out there cares to fill in the blanks, be my guest!

END_OF_DOCUMENT_TOKEN_TO_BE_REPLACED

[Shucks, there’ve been a couple more (thanks again Snow and Ahjusshi Fan!)so I’ve updated this page to keep the Liebsters together. Scroll down if you’re interested ;)]

Well lookie here! I’m really chuffed and grateful for Erl at A Mix of Anything and Everything for nominating me for the Liebster Award (why do I feel like I’m writing my Oscar acceptance speech?).

I know everybody says this but it is true that I’d never really thought anyone would read anything on my blog, let alone receive something like this.  So I am downright humbled and well pleased that this has come my way. So Erl, I shower you with rose petals, and same goes for anyone who has ever read and commented here on my little corner of the world. Everyone gets rose petals! END_OF_DOCUMENT_TOKEN_TO_BE_REPLACED

Since it’s the holiday season, I decided to give you the gift of bad photoedit jobs and lame puns, one which I’m convinced you’ve heard before. But seriously, before I head home for the holidays, I wish everyone a good meal with good company and hopefully, a good drama!

1. It’s that time of the year for best-of lists,  and the general consensus in the dramaverse seems to be it’s been mostly ‘meh’ with one or two bright spots but distressingly bad for rom-coms. You would think a good rom-com wouldn’t be so hard to come by but noooo. Dramaland,  go sit in a corner! END_OF_DOCUMENT_TOKEN_TO_BE_REPLACED

Discovering: EXO’s ‘Growl’ a.k.a. What Have You Done to Me Tumblr?

And you should probably know that I’m terminally behind the times. My middle name is ‘late bloomer’ so I apologise for a post that will be gushing about something that’s old news.

I should start with how I came across EXO in the first place. I caved and got on tumblr last week, and much to my surprise I’ve been mesmerised. It’s taken over my online life.

Who knew there was a plethora of witty commentary on dramas on tumblr? And not all of it written, mind you. Tumblr is a wonderland for what appears to be either budding or repressed creative souls needing an outlet for expression.

Prior to this I knew as much about tumblr as I know about the spark plugs in my car–it’s there, and without it, the internet does not function. Ok I kid, but after fooling around for a couple of days,  I now understand that tumblr occupies that crucial space between blogging and Twitter. It’s for those who have short attention spans (but I guess what isn’t?). It’s for those who find Twitter’s 140 character limit too restrictive but yet can’t or won’t churn out essays.

No wonder then that it’s a playground for the pithy and the ephemeral. Gifs scroll by, you giggle, swoon, then move on. Tumblr is where people respond immediately to what they see. You feel none of the pressure to write coherent sentences. Few on tumblr do. Occasionally, you’ll encounter paragraphs. But mostly, it’s snapshots.

At lot of the time, you’re re-blogging other people’s content. But that’s what it’s designed for–sharing. Less interacting, more broadcasting.

And if you’re looking to join a fandom, tumblr is heaven sent. Whether it’s your favourite k-pop group, Supernatural, Beyonce or Harry Potter, you’re guaranteed to find company. You will also, if you’re outside the teen demographic, mostly likely feel way too old.

Beware though, for the wave of content will be a tsunami and it will overwhelm you. Your eyeballs might implode. You will spend more time on tumblr than you should. It’s a black hole. For someone who is primarily a reader and looks to the web for stuff to read, tumblr has forced me to rewire my brain.

Which leads me to EXO. I came across this article which I gamely read since I know nothing about K-pop.

What I knew bout EXO was limited to A) their sasaeng fans, and B) a song about wolves that was not my cup of tea. So imagine my shock to find that EXO had not only a great song in ‘Growl’ but a video (or MV, in K-pop parlance) that was downright awesome.

First, as one must when discussing K-pop, the music. For someone who (mis)spent a good deal of her youth listening to hip hop, R ‘n B and soul almost exclusively, this song scores points with me. It’s straight-up R ‘n B which I thought had gone out of fashion awhile ago. The production is minimal, inoffensive. It’s just a catchy, straight-forward R ‘n B song which is exactly what I like about it. It’s not a stylistic mash-up of what I know of K-pop.

Second, as one must when discussing K-pop, the video. It’s shockingly bled dry of colour. The set is what looks like a grey empty warehouse. And that’s it. Seriously. A K-pop video without neon is borderline heresy. But it’s clearly a stylistic choice to allow the choreography to take centre stage.

Which by the way is kickass. I’m sorry, but I’m out of descriptors because that’s exactly what it is. And the boys dance their cute buns off. They shuffle, they pop and lock, they hop, they do all manner of things in perfect sync. And they do it with swag.

The video is shot in one take which is a simple idea but tricky to execute. There’s no room for mistakes, but yet there’s room for imperfection–there’s a moment in the video where someone’s cap falls off and he bends down to pick up. It’s utterly refreshing to see as I’m used to more carefully constructed and stylised imagery in K-pop. 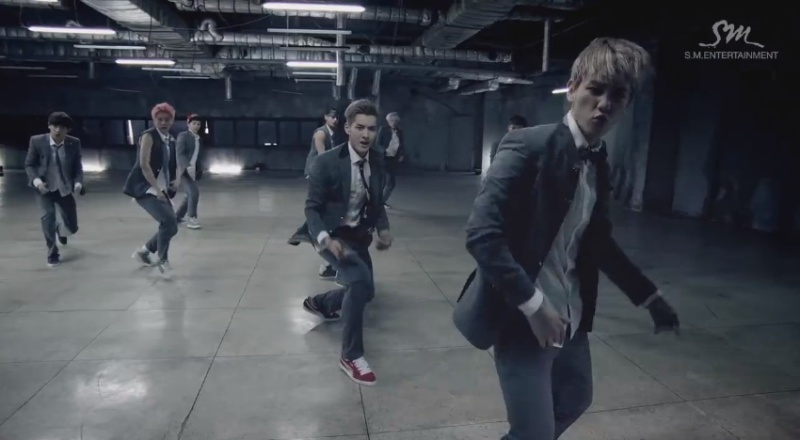 Then there’s the stellar camera-work, which weaves in and around the boys for 360 view. It’s immersive and it makes you feel like you’re surrounded by them boys. Which is not a bad place to be.

Because look at them! They’re styled so simply. They look like regular boys. It’s like School 2013 meets barbershop quartet. I’m used to K-pop groups looking like they’re dressed for a party from the distant future. Score more points for pared-down fashion.

And then there are the 12 boys–why so many, SM? Whyyy? I have no idea who is who, but as the camera swirls around, one face after the next comes into view, I struggle to latch on. The video serves you a buffet of cute but you have to chase after it. My fave is the one wearing red shoes. Or was it a cap?

I don’t think I’m on my way to becoming an EXO-tic just yet, but life has a way of proving me wrong. And I don’t know what else tumblr will throw at me but I’m a little afraid to find out.