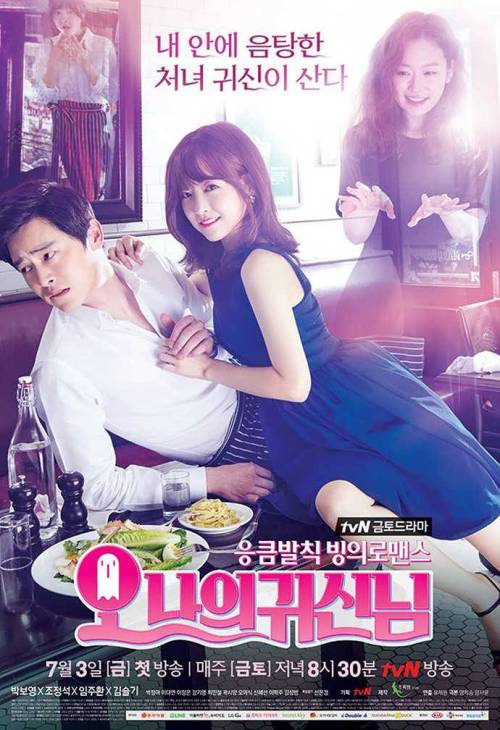 Premise: A lusty ghost possesses the body of a meek mouse in order to get closer to a celebrity chef, and gets more than she she bargained for.

A romantic-comedy that’s a bit of an odd duck, Oh My Ghost has many strengths that far outweigh its considerable weaknesses. With a tinge of a macabre and melancholy, this is a show that ultimately satisfies despite a few missteps, thanks in no small part to some very strong lead performances.

With a premise straight out of The Master’s Sun and spliced with a dose of Coffee Prince, you won’t be in unfamiliar territory. Also coming hot on heels of the recent crop of split-personality dramas, OMG puts a different spin on that trend, and with a murder-mystery thrown in the mix, it’s a minor miracle the show is a lot less scattered than it sounds on paper.

The plot revolves around a trio of characters: heroine Bong Sun (Park Bo Young) is a mousey, meek ghost-seeing kitchen helper with a big crush on her boss, cocky Chef-on-the-rise Kang Sun Woo (Jo Jung Seok); the titular ghost is Shin Soon Ae (Kim Seul Gi), who spends her days possessing women in order to lose her virginity in a desperate bid to resolve her ‘grudge’ and transition onto the next life. The plot kicks into gear when Soon Ae takes over Bong Sun’s body when she thinks she’s found the right man to sleep with—Chef Sun Woo.

Soon Ae is Bong Sun’s polar opposite: loud, excitable, and assertive. Naturally, post-possession Bong Sun’s personality change raises a few eyebrows, not least Sun Woo’s. In the midst of the restaurant kitchen antics that ensue, Soon Ae also begins to recover lost memories and reconnects with her family, sparking the show’s other main thread of a murder-mystery.

The show spends a great deal of time on Soon Ae’s story, and your enjoyment of the show will likely depend on whether you care enough about a character who isn’t going to get the guy. Which is to say, if you come looking for a straight romance, this show may frustrate you especially in the earlier episodes.

But if you keep an open mind and have a little patience, you’ll find the heart of the story lies equally in Bong Sun and Soon Ae’s friendship which grows into a bond that helps each girl mature in their own ways over the course of the show. The romance, once it solidifies, though unlikely to inspire the kind of undying devotion seen with other classic K-drama OTPs, is sweet and relatively angst-free.

It helps that the show has more than a few bright spots among its secondary characters. Sun Woo’s old friend and almost-love interest So Hyung (Park Jung Ah) is a delightful twist on the clingy and sabotaging second-lead trope. The shaman ahjumma Suh Bingo becomes an unlikely Soon Ae ally. The restaurant kitchen crew offer some comic relief and eye candy, the latter primarily in the form of the drop-dead drool-some kitchen whizz Joon (Kwak Si Yang).

Kwak Si Yang, where have you been all my life?!

There are however, some missteps and could’ve-been-betters. The rules of the ghost-world are murky at best, leaving many unanswered questions that negatively affect the show’s central antagonist, Sun Woo’s brother-in-law, Sung Jae (Im Ju Hwan).

Ultimately, Sung Jae’s character is severely undermined by the lack of clarity about to what extent his actions are his own and what are the evil ghost’s that possesses him. Where Sun Jae ends and where the ghost begins, we don’t know. Whatever sympathy we feel for him is all thanks to Im Ju Hwan’s performance, who can go from creepy and chilling, to tragic and anguished with just one switch-up in his eyes. (He definitely gets my vote for the show’s MVP.) Sung Jae’s reset at the show’s ending also feels like a tacked-on afterthought and stuck out like a sore thumb.

The show also didn’t do justice to Eun Hee, Sun Woo sister (Shin Hye Sun), who had her character been beefed up, would’ve added much more depth to the proceedings in two key areas in Sun Woo’s life—at home, as connecter between Sun Woo and his unconventional mother, and as a loving, unsuspecting wife to Sung Jae; and as a clued-in observer to the shenanigans at Sun Restaurant. There is so much wasted potential in her character, what with her being robbed of a promising future and all, that it almost feels tragic.

The show also devotes a disproportionate amount of time to Soon Ae in the beginning, to the detriment of Bong Sun’s character and the show’s pace. When the characters finally converge, it’s almost a little too late.

Almost. I have used that word a lot in this review, and in the end, it’s an incomplete descriptor because it would be unfair of me to define this show by what it could’ve been, rather than what it is.

And what it is, is a perfectly enjoyable, very charming show with lots of offer.