Friends, I’m late for this so I’ve decided to cheat and combine a few things and do the digest a little differently this week. If you aren’t watching Secret Love Affair there will be nothing here of interest I’m afraid. Sorry!

For the rest of you, keep calm and carry on.

So it looks like cohabitation is in the offing, along with a pained back hug, just in case we forgot that this is truly a Kdrama. Sophisticated does not mean it can’t be makjang, right?

We’ve entered week two of the drama that’s been fogging up my glasses with nothing more than some spirited piano playing and online chatting. Being the  professional lurker I am, I’ve seen words such as “absorbing”, “heady”, “intriguing” used to describe Secret Love Affair. The best yet described the experience of SLA as something akin to“swimming in sex soup“.

Which is so spot on it made me ask myself what exactly goes into this “sex soup”?

First, the intense chemistry between the leads Yoo Ah In and Kim Hee Ae is undeniable. There’s a point where just being good actors isn’t enough to make something like this work. Either you have chemistry or you don’t. And these two have it in spades.

Half the fun is anticipating their physical intimacy. There’s nothing like taboo to make something doubly thrilling. Make that triply thrilling because there are about two levels of inappropriate and one taboo wedged in here–she’s married, he will be a student in her school, twenty-year age gap– that make the promise of their skinship so alluring. As any five year old will tell you, whatever is forbidden is also extremely desirable.

The spirited piano playing I talked about earlier which arrives early in episode 2, is as overtly sexual as anything you will see in a Kdrama. It is a symbolic of union of other things (musical souls, creative spirits) besides bodies, but sorry, my mind is squarely in the gutter here.

But it’s not just me, because our virginal male lead Sun Jae pretty much says he had his cherry popped at that piano. And if it was already that good for him, imagine the possibilities when the time comes to actually erm, do it. Will the drama go there? They’d better is what I’m sayin’!

And while on the topic of skinship, what we’ve seen so far has been a deliciously kinky (foot fetish anyone?), sly and tantalisingly ambiguous (I mulled that kiss over for days). It’s all also been emotionally meaningful and meticulously considered. Nothing is frivolous or empty titillation. In other words–SEXY.

There’s also the dark, moody cinematography makes this world feel like it’s steeped in the pheromones. We lurk around corners tracking high-heeled feet getting into cars and such–it’s all very voyeuristic. But very posh. This is not some  grimy Patpong peep show.

Then there’s the fact that our lead Hye Won is a woman on top–always very sexy in my view, especially a woman who loves the power she’s acquired and is willing to do questionable things with it. Oh yes, Hye Won is no angel make no mistake. In fact, for all their sophistication, almost everyone in this world is so… dirty. Sex, money, power, corruption–it’s all here.

Last but certainly not least, this is obviously a drama that has a brain. And isn’t the brain the sexiest of organs? This is the kind of drama that gets under your skin and attaches itself like a barnacle deep inside your head. Stew in the soup long enough and thoughts about this drama are likely to pop up during the most mundane of moments, like while washing the dishes or taking a shower.

Thoughts. You will have lots of them. In a drama where everything is so exacting, layered and carefully assembled, you will feel compelled to read into everything and perhaps find meaning where there might none. For instance, why was Hye Won wearing a blue scarf during that kiss? She never wears blue. Is blue the colour of desire? Is she being CHOKED BY HER DESIRE? Or maybe the stylist just wanted to plug blue scarves from Louis Vuitton?

This path as you well know, leads to madness. It’s what has been keeping me up at night.

But I did say earlier that this drama will probably destroy me. But at least my last meal will be sex soup!

SLA is a bonafide eargasm for classical music geeks and it may just drive you to suss out the piano-porntastic piece of music Hye Won and Sun Jae play, the Fantasie in F Minor by Schubert.  I have rudimentary knowledge of classical music but I do know that if you learn the piano, that aside from Bach, you will most likely play some Schubert and Schumann at some point.

What google fu has taught me is that Schubert is the quintessential tragic historical figure—the bohemian artist who lived hard, died young and despairing, whose work was destined to only be appreciated posthumously. The Fantasie is a work that’s infused with sorrow (he was dying at the time), and is built on the interplay between beautiful gentle melodies and sudden stormy passages.

I stumbled on this online lecture which I recommend if you want to indulge in some nerdery (awesome historical overview of the work with a full transcript if you prefer to read). A particularly interesting passage starts at 35:00 where there’s a discussion about the technique involved a duet such as this that requires  “quite a lot of breathing together.” Which, well you know where my mind went.

I wrote up a short thingy about the Fantasie here if you’re interested.

Atsu-Chan at the soompi forum thread also wrote a fascinating comment about how this pair mirrors the relationship of Clara Schumann, her husband Richard Schumann and Brahms, which I urge you to read. I hope someone will write more about the music and give it the careful analysis it deserves because there’s so much of it and none of it chosen carelessly. (See what I mean about this drama having no shortage of things that keep you up at night?)

For those looking for to fill the SLA void while waiting for subs listen up:

This is aside from individual bloggers writing stuff about this drama as it unfolds. Google is your friend, or just check out the Soompi thread. 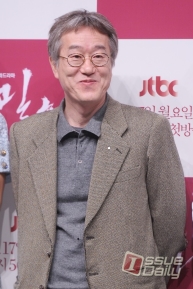 I just want to give a nod to the drama’s PD, who obviously wants to make something challenging with SLA. I mean, here is a drama that actually has something to say about the world, and aims a little higher than the most drama in terms of substance.  But he’s here primarily to tell a story, a very human one, and not beat you over the head with a moral or an agenda. Thank god, because where’s the fun in that?

I think this quote of his from the press conference tells us a lot [italics mine]:

In other words, the majority of us in this society is living a calculating life and taking an easy way out. Oh Hye-won, a 40 years old woman, intends to follow a safe path to live her life. Until she dies, she will not have any chance to look back on the reality of her life. Once she commits the “crime,” ironically it is the moment when she examines her life and realizes that her “safe” self which presumably adheres to ethics is in reality one loaded with problems. From a social perspective, isn’t her predicament to a certain degree also the self portrait for all of us, who strives to have a deceptively easy and comfortable life?