[I’m handing over the reins for this one to the hubs Warrible, he of this glorious listicle. He writes full paragraphs this time round ;D–DDee]

Bong Joon-Ho’s dystopian epic has finally arrived on our “secondary-market” screens, fully intact and free from the much-discussed Weinstein cuts.

With much anticipation, me and the Mrs had the chance to take this ride during a late-evening screening. And for much of its ample 126 minute runtime, I am happy to report that Snowpiercer runs on all cylinders. Snowpiercer proves itself to be a prime example of the sort of intelligent, exciting and plain strange entertainment that Hollywood prides itself on never risking to make.

It’s 2031 and the titular train is all that stands between its inhabitants and the cold embrace of a world devastated by winter disaster. All of humanity are now forced to live in strictly stratified confines on a train that never stops moving.

On the side of the have-nots at the back of the train are an assortment of motley rebels led by Curtis (Chris Evans) and Gilliam (John Hurt), who pick up the train’s former security expert Namgoong (Song Kang-Ho) and his plucky daughter Yona (Ko Ah-Sung) and others (Octavia Spenser, Jamie Bell) along the way. At the front of the train are the privileged upperclass denizens driven by Minister Mason (Tilda Swinton) and the mysterious creator of the locomotive, Wilford (Ed Harris).

This propulsive tale of class-warfare is frequently funny, violent and devastating with a good dose of Bong Joon-Ho’s trademark directorial touches, most recognisably from The Host. It’s as if Joon-Ho delights in throwing the viewer off balance while ensuring the more base desires for visceral entertainment are met. Traditional blockbuster action movie beats are almost always skewed with scenes that are both interesting and distinctly Korean.

More importantly, it’s never boring or plagued with the pacing issues so many Korean movies suffer from despite the movie’s length. And some quality performances are here too. Unsurprisingly, I should note, what with the Mrs. being a Song Kang-Ho fan and myself aspiring to Chris Evans’ steely Captain America ideals.

I must admit to some initial trepidation at the movie’s concept, but I’m thrilled that Joon-Ho decided to take Snowpiercer into the same realm of satiric, retro-futurism inhabited by Terry Gilliam. These qualities are best represented as our heroes of the revolution make their way from car-to-car towards the front of the train, experiencing a medley surreal of situations along the way.

It’s a shame then that cracks do appear in the movie’s primarily English script. I had broadly assumed that some of the awkward dialogue could be attributed a writer who doesn’t speak English as a first language a la the numerous Luc Besson-produced movies. Alas, Kelly Masterson who wrote Before The Devil Knows You’re Dead  was responsible. One suspects that Charlie Brooker, writer and creator of the excellent Black Mirror British TV series, which treads on similar ground, may have turned in better work here. A lack of experience in English-language productions may have also limited Bong Joon-Ho’s ability to tweak the script as many Hollywood directors tend to do. 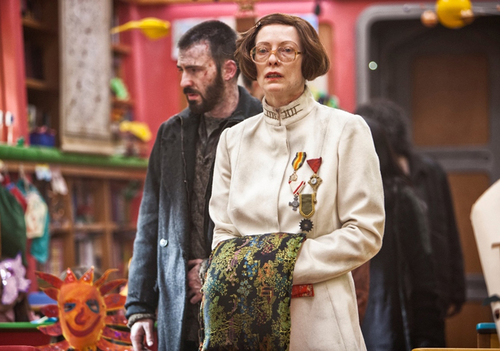 Another caveat would be that players of the video game Bioshock and viewers of fare such as the aforementioned Black Mirror (heck, even the Twilight Zone of old) will be thoroughly unsurprised by the plot twist at the end of the movie.

If I were less charitable I’d go as far to say that Snowpiercer actually goes off the rails by the end, failing to satisfactorily tie together its themes and complete their characters journeys in a clear and logical manner. But all that came before is so exemplary, that you won’t be walking out of the cinema feeling short-changed.

It’s hard to say if the Weinstein cuts would have actually improved the movie (as it did for Takashi Miike’s 13 Assassins). But watching this movie makes me truly appreciate auteurism for what it is.

Snowpiercer is a true Bong Joon-Ho movie, warts and all. If you’re on board, you’re in for one hell of a ride. If not, I suspect your life may be all the poorer for it.

Recommended: Yes, especially for those looking to ease their way into Korean films.